Men in Black 2: Blame it on the Bogie. 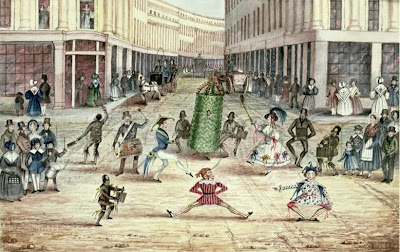 My first thoughts on looking for a folk festival which could explain Oookbarloo's testimony was to turn to the accounts of Arctic whalers. My reasoning being that, as many of the crew came from the Northern parts of Britain, at least some would have been familiar with whaling traditions. Sure enough there are several reports of May-day festivities on the ice, involving garlands of ribbons and a ceremony with King Neptune similar to the more familiar crossing-the-line rituals. Nothing about blacked up men though.

Next I turned to land-based festivals, and sure enough, the May-Day festival of the London chimney sweeps has blacked up men in abundence. 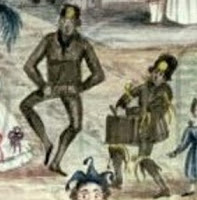 Here's an account from Charles Dickens dated 1836. He laments:

"This gradual decay and disuse of the practice of leading noble youths into captivity, and compelling them to ascend chimneys, was a severe blow, if we may so speak to the romance of chimney sweeping"

All the Year Round from 1893 reports:

"the Mayday celebration, with its barbaric music, and its mysterious Jack-in-the-green, when, with other strange figures, some grinning black fellow would represent the foul fiend and drive lads and lasses screaming before him, was a thing to move the stoutest heart.


The Children's magazine from 1893 informs: "They are not real black-a-moors, but they seem to be nearly as black in their skins as if they were Africans born"

A good proportion of the ships' crew came from the London region and so would have been perfectly familiar with these festivities.

The looks and behaviour of the "black men" in Oookbarloo's report seem to fit perfectly with the descriptions of the contempory May-day festivities of the sweeps. The date of May 1, 1847 (six weeks before Franklin's death) would allow for the dog-sledge driver's second visit to have been "when the sun was high, that is, it was well into spring or summer" .

So, I'd say that Charles Francis Hall was absolutely spot-on when he mused that the native had interrupted some kind of pantomime or entertainment.

Referring to the picture at the top of this page, Andrew Graham-Dixon's article begins:

"In anticipation of May 1 and its traditional festivities, this week’s picture is Thomas Sevestre’s watercolour of a curious but now-defunct ritual".

He's not quite right there because the festvities dipicted were revived about thirty years ago and are now a major event in several places, including my home town.

I have to say I'm completely amazed by this connection! 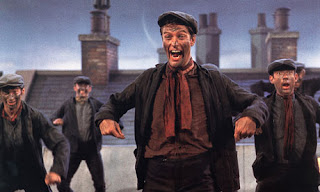 Original: 21/12/2011
Update: 15/04/2012
I no longer think that the above is a plausible explanation for the black-faced, black-clad men who frightened the inuit dog-sled driver. One reason is that, in contrast to other folk celebrations which are attested on Arctic expeditions, the sweeps' festival had a commercial motivation - the coins collected from the crowd. Another reason is that I've had a better idea.