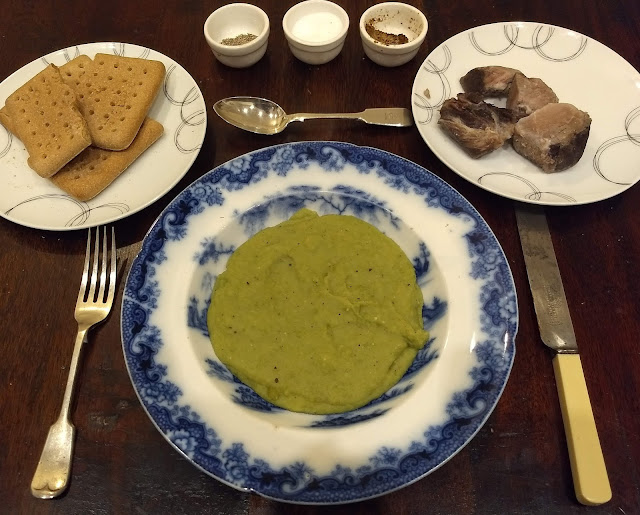 The meal to mark the end of the week was salt pork with pea soup. Long boiling of the pork left the meat tender but perfectly flavoursome. It also yielded a tasty but rather salty stock, which, diluted with the water in which the split peas had been steeped, plus some additional water from the ship's tanks (i.e. the kitchen tap), made the basis of the soup.

Some authors have written approvingly of the technique of mashing the peas by putting a round-shot into the coppers "which from the constant motion of the vessel acts as a sort of crushing machine", but that was not resorted to in this case (I used a hand blender).

The only condiment added was a sprinkling of ground black pepper. From the image it can be seen that the 'soup' is not entirely liquid, being more of a thick paste - somewhere in the middle ground between a soup and a pudding. That did not, however, impair the excellent flavour of the dish in any way. Either alone, or with the addition of meat that was easily shredded with the fork, this was a veritable treat and it is not surprising that it was one of Jack Tar's favourites.

Additional liquid would have been a boon with regard to the shards of ship's biscuit employed as croutons. There being no surplus for them to absorb, they softened hardly at all, resolutely maintaining instead their fortress-like resistance to this diner's molars.

However, that is indeed a minor gripe, which was no detriment to the enjoyment of the meal, and will easily be rectified as the embryonic ship's cook gains in experience.

This was the seventh day of dining on the victuals of Queen Victoria's Royal Navy, and it marks the end of this particular voyage of discovery. The stock of lemon juice is almost expended, and although a dose of scurvy would convey incomparable bragging rights among the Arctic aficionados, the call of home has won through.

This may, however, be reckoned as just a preliminary excursion. A sort of training expedition as it were. Certainly, much of the fare reported on these pages will be revisiting the writer's table in the future. But for now, there will be a period of revelling in the comforts of home cooking and all the luxuries of the life ashore. 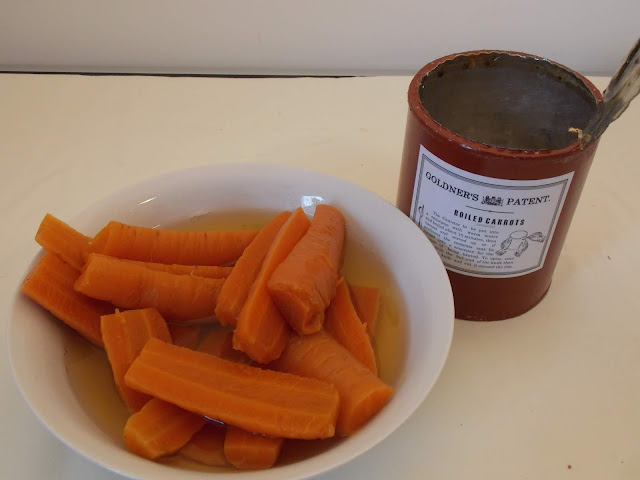 Day 6 brought the welcome addition of (simulated) Goldner's Patent preserved carrots to the table. The bright, natural, colour and pleasant aroma raised the prospect of a most pleasant meal. It has to be said that these hopes were not entirely realised as, although the flavour of the carrots was all that could be asked for, they were decidedly overcooked. This information will be passed on to the contractor immediately the voyage is completed. 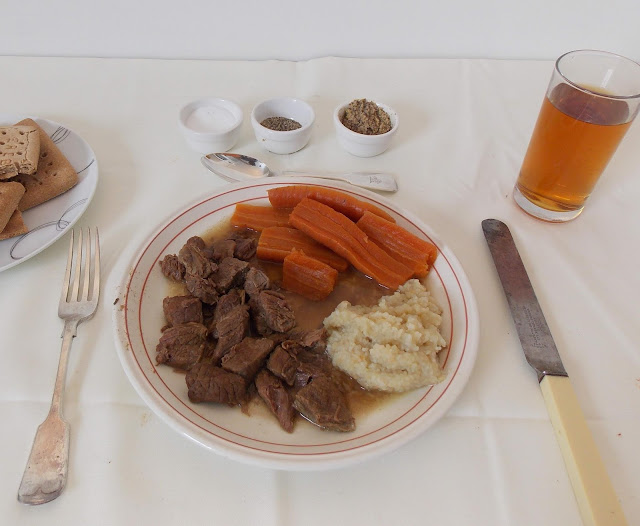 Setting aside that small criticism, the day's dinner was exceedingly well received. The combination of three preserved ingredients, combined with broken biscuits to soak up the gravy, made for a most harmonious gastro-nautical experience.
- July 20, 2019 No comments: 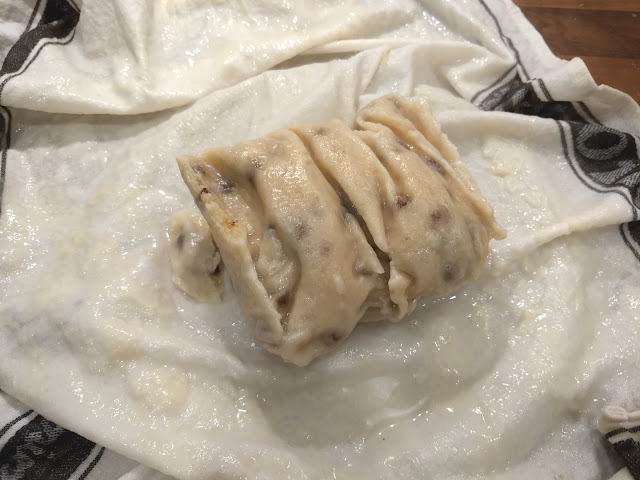 On Day 5 dinner was salt beef again, which this time was properly cooked. It was tender and tasty enough yet it still didn't fare too highly in the flavour stakes in comparison with the excellent preserved meat served the day before. The plum duff which accompanied the beef was this time a triumph - a notable improvement on the ship's cook's previous attempt.

In the absence of a properly sewn pudding bag, a linen tea towel was called to serve in its stead. The specified allowance of nine ounces of flour was thoroughly mixed with an ounce and a half of raisins and three quarters of an ounce of suet. Sugar was added plus a couple of ground allspice berries and a splash of rum before mixing with water to create a sticky mass which was rolled in the wetted and floured cloth. 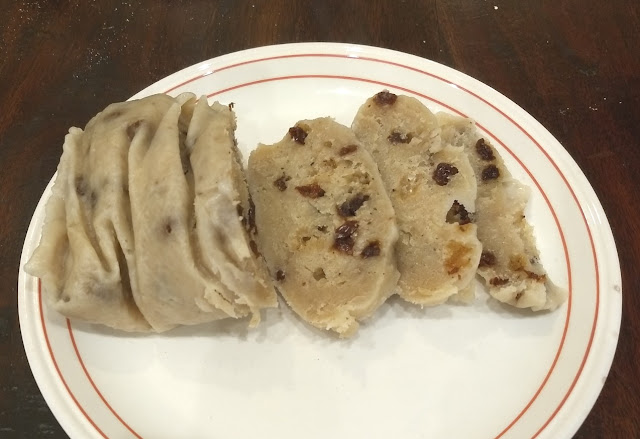 After an hour's boiling the package was opened and pronounced to the finest example of a (simulated) mid nineteenth century Royal Naval plum duff known to history. In the photos the raisins appear somewhat sparsely distributed, after all they only account for one sixth the mass of the flour. However, the delicious essence of the fruit, was found to permeate throughout the whole to create a very well balanced and satisfying pudding. The quantity was sufficiently generous to provide a slice each to two visitors to the mess table, both of whom pronounced it to be first rate.
- July 19, 2019 6 comments: 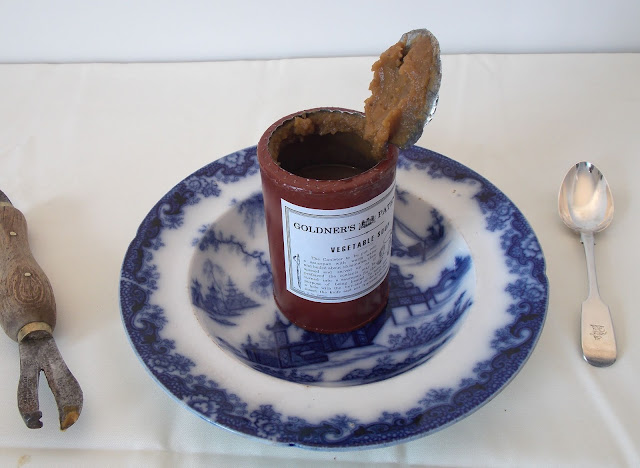 Dinner today was preserved meat and preserved potatoes once more, but this time enlivened with a can of (simulated) Goldner's Patent Vegetable Soup. This soup is made with carrots and parsnips boiled up in home made beef stock, then pureed. There is a certain amount of overlap, in the recipes of the time, between vegetable soup and gravy soup. Certainly it does look like gravy in the photo below. The can in question is of the 1 lb size, the smallest available. Only 456 cans of this size are recorded on the expedition's accounts, representing just 1 percent of the total of 32,000 lbs of canned foods. I suspect that these small cans were intended as 'medical comforts' for individuals in the sick bay. 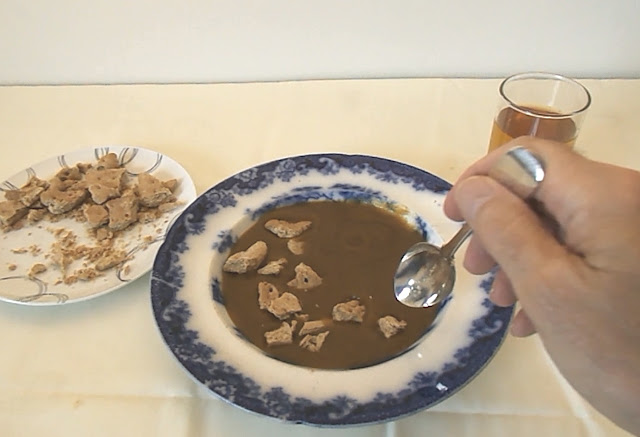 Crunched up ship's biscuit served for croutons. This was a good move as the rock hard biscuits are hard work to eat by themselves, but softened by the soup, they were far more palatable. My verdict was "quite delicious, but slightly over-seasoned". Very welcome on a cold day.
- July 18, 2019 2 comments: 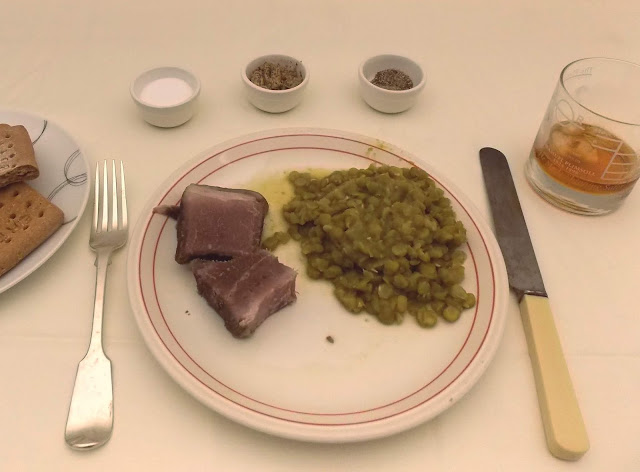 Overall, my verdict on this dish is good, but could do with a bit more care from the cook, to make the meat a little more tender.
- July 16, 2019 2 comments: 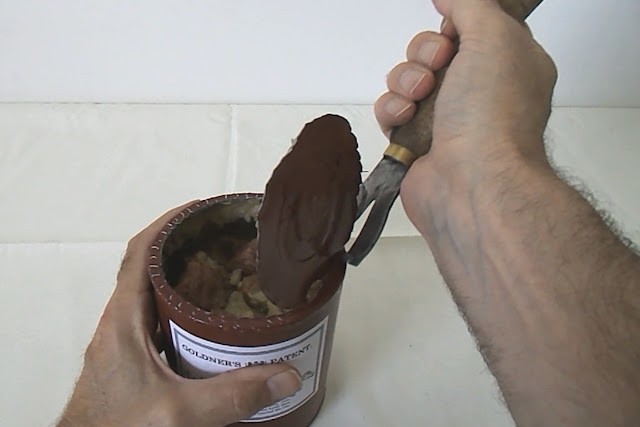 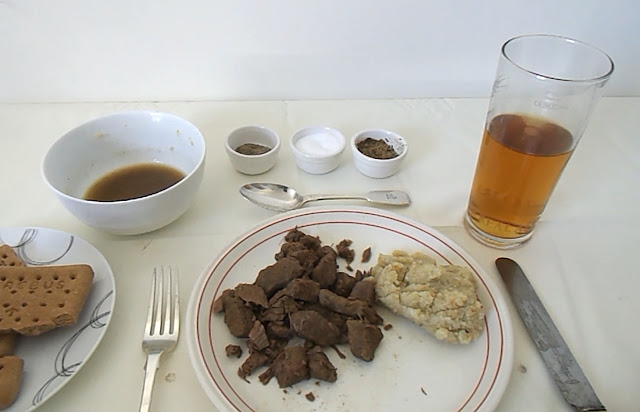 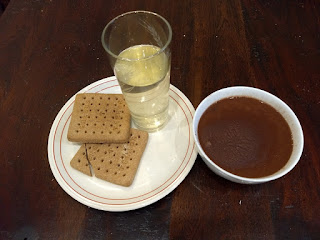 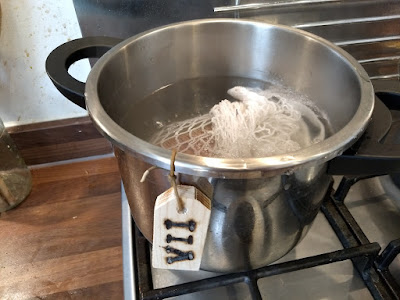 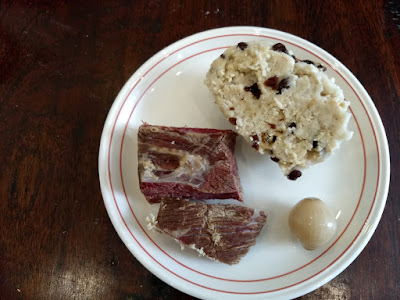 My verdict: The meat was a bit dry but reasonably tasty - a bit like pastrami. The duff had too much flour due to a measuring mistake but although the raisins were sparse, their flavour carried through. Not bad, perhaps just a bit dull. It would have been improved with some gravy. Overall a good start although I had a thick head for most of the afternoon due, I believe, to my not being acclimatised to drinking grog in the morning.
- July 14, 2019 3 comments: