The Engines of Erebus and Terror - part 2 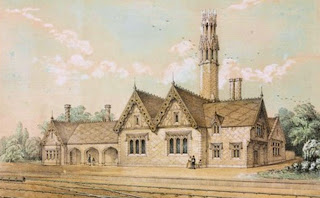 I made several visits to the National Archive last summer, always expecting to find the smoking gun to confirm my identification of the engines of Franklin's ships but never quite finding it. Until I do, here's a mixture of circumstantial evidence and speculation.

MJT Lewis (1971) and RHG Thomas (1972) make a case for engine No4, "Twells" of the Greenwich Railway (L&GR) as a candidate for the engine of Erebus but so far all I can say for certain is that it disappears from the records sometime in the early 1840s.

Concerning the engine which supposedly "once ran somewhat faster on the Birmingham line" I quote from an email from railway historian Harry Jack: "The possibility of a London & Birmingham engine of any sort in HMS 'Terror' seems now to be very unlikely, for which I'm glad."

Harry wrote the book on the Birmingham engines, and I'm most grateful for his encouragement and suggesting some valuable sources. Thanks are also due to Gerry Nichols of the Stephenson Locomotive Society for providing much useful information.

The Greenwich company had a maximum of 9 engines, the fates of 8 of which are known. Two were transferred early to the Dover company (the SER) in 1844 and the remainder when that company's takeover was completed the following year.

When locomotive engineer Benjamin Cubitt enumerated the stock of the Brighton Croydon & Dover Joint Comittee on 5 March 1845 at 97, he included 8 which were the sole property of the Dover company - presumably these were the former Greenwich engines, the remaining 91 being jointly owned by the three companies. In all, 50 were in service, 25 under repair, 4 out of use, and 18 in reserve. Twenty six new engines were expected within two months.

National Archives. Crown copyright waived for non-commercial use.
Railway historian Donald Bradley reported (1963) that locomotives Croydon and Archimedes were withdrawn from service in January 1845 although I have not yet located the original source of this information.

Brief summaries in the logbooks, now in the National Archives, used by the Admiralty to keep track of their correspondence record that Maudslays' proposal to use second hand engines was accepted by the Admiralty on 1 March 1845 with the proviso that they were made variously "thoroughly efficient" or "perfectly efficient". The actual correspondence itself has not survived.

I suspect that the 1 March permission was not so much the the green light for Maudslays to start shopping for second hand engines than the formal acquiescence to a course of action which had already been begun.

One snippet of information which for a time enamoured me to the possibility that Maudslays' chief Joshua Field might have favoured Edward Bury's bar-frame design for the engines for the Erebus and Terror was the fact he had built twelve goods engines of that type for the Birmingham railway between February 1837 and November 1839.

Less well know is the fact that at the same time as Maudslays were working on the engines for Erebus and Terror they were also building engines for the London and Croydon railway.

On 22nd August 1844 the company's civil engineer, William Cubitt (Benjamin's elder brother), presented Maudslays' tender to the board to build to build sixteen engines as part of a project to extend the company's line to Epsom. The tender was agreed at a price of £4,150 (later £4,240) for each pair of engines including "apparatus for working the steam expansively". Should only one pair be required the price quoted was £8,900, which illustrates the advantages of serial production. If the engines for Erebus and Terror had not been identical then extra costs and delays would have been incurred for separately designing and manufacturing the new parts needed for the conversion.

The engines Maudslays built for the Croydon company do not appear in any list of locomotives, as the new line did not require any. They were, on the contrary, stationary engines of 50 HP (nominal) to be fixed in pairs in ornate gothic revival engine houses to power the latest wonder of Victorian ingenuity, the London Croydon and Epsom Atmospheric Railway.

The idea of working a railway on the "Atmospheric Principle" enjoyed a brief flowering in the mid 1840s. The train was propelled by a piston running in a 15 inch diameter pipe between the rails and connected to the train through a slot sealed with a flap valve. The illustration at the top of the page includes some of the pipe at the bottom left and an original section is on display in the Croydon museum. The arrangement has similarities to the steam catapults used on 20th century aircraft carriers except that instead of being pushed by steam pressure the piston was moved by the difference between atmospheric pressure behind the piston and a partial vacuum in front. The vacuum was created by huge exhausting pumps driven by the stationary engines.

Although the Croydon atmospheric railway did operate successfully for long periods it was ultimately a failure and scrapped in 1847.

The close ties between the parties mentioned can be illustrated by considering this list of officers of the governing council of the Institution of Civil Engineers in January 1845.

In contrast to its specialised modern usage, the term "Civil Engineer" originally distinguished civillian practitioners of any branch of engineering from Millitary Engineers.

Joshua Field was one of the six "idealistic young men" who founded the Institution in 1818.

Sir William Cubitt presented his first paper at the Institution in 1827 and is listed as a vice president along with Field in the first volume of transactions in 1836. He built the Dover line in the 1840s and was knighted in 1851 for his work in constructing the Crystal Palace.

Benjamin Cubitt was elected to the institution in 1843 and "served on the council very zealously".

Sir John Rennie's elder brother George had been a member of the council in 1844. In May 1839 Joshua Field's evidence ensured that the Rennies were cleared of blame when the boiler of their screw steamer Archimedes exploded.

From Field's point of view, using engines built by his friends the Rennies at a works less than a mile from his own would have been almost as good as if he had built them himself.

The Rennies would have been able to provide manufacturing drawings which may have been useful in planning the conversion and details of the innovations they applied to their highly praised later engines.

Details of the locomotives Archimedes and Croydon can be found in three published sources:

Brees' description (p14) of the Croydon engine contains a table of information (included in my previous post) which tallies perfectly with Wishaw's. 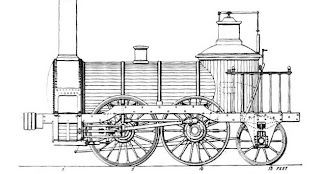 Not Croydon, but possibly Hercules

However Brees is wrong in identifying Croydon as an assistant or banking engine as it is clear from the other sources that Croydon and Archimedes were passenger engines and the assistant engine for helping heavy trains ascend the line's 1 in 100 gradient was appropriately named Hercules. The drawings of the engine Brees calls Croydon show an 0-4-2 engine with outside cylinders and it is easy to show that the measurements in the table do not match the drawing.

Brees says that Croydon was constructed in September 1838 and worked for four months with scarcely any repairs. In contrast the L&CR board minutes show that Croydon was delivered in August 1838 and needed immediate repairs by Messrs Braithwaite.

Most of the Rennies early locomotives seem to have been badly defective when delivered. Some of Maudslays' engines for the L&BR had problems too.

The board minutes also record that on January 4th 1842 "the cranked axle of the 'Croydon' Engine broke short off close to the left hand connecting rod, the engine being without a train & the steam off at the time". The engine in the drawing above, which Brees calls Croydon, has no cranked axle due to its outside cylinder design.

Brees (p100) includes a description of engines on the London and Southampton Railway which concludes with the line "Similar engines were constructed by Messrs. Rennie for the London and Croydon Railway". One of the drawings referenced is shown in my previous posting. My suspicion is that these are actually drawings of "Croydon". 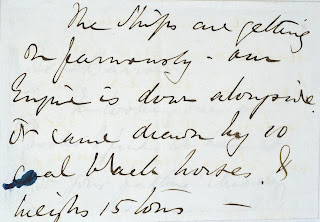 Copyright Royal Geographical Society
Wishaw and Brees give the weight of the engines as 14 tons 5 cwt in working trim and 13 tons empty. The 1841 Board of Trade report gives the working weights as 14 9 and 13 5 for Archimedes and Croydon respectively. The discrepancies may be errors or reflect modifications to the engines in service.

In the note above, Commander James Fitzjames gives the weight of the engine for the Erebus as 15 tons. If this is the dry weight or even a notional weight in service it indicates that Maudslays added a considerable amount of metal to the engine after discarding the frame, wheels, suspension, and surplus axles.

This suggests that the finished engines had very substantial cast iron framework. Building machines with cast iron frames had been the tradition established by Henry Maudslay early in his career when he equipped the Portsmouth block-making workshop to the designs of Marc Isambard Brunel. The ironwork for the large engines built by Maudslays for paddle steamers often included decorative elements derived from architecture. 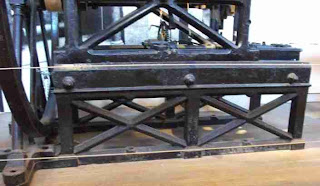 One of the block making machines on display at Portsmouth Dockyard.
To adhere to the Admiralty's instructions, the engines will have been rebuilt with the most up-to-date technology including Stephenson's link valve gear to allow expansive working with consequent increased economy, and Isaac Babbit's soft metal bearings which were vastly superior to the plain brass bearings previously used.

In 1824 Henry Maudslay and Joshua Field had patented a method of continuously changing the salt water in a ship's boiler with fresh seawater while recovering heat from the dumped boiler water via a heat exchanger. I would not expect sea water ever to be used in these boilers but I would not be surprised if there was some additional equipment either to condense a proportion of the spent steam or to melt ice to make water for the boiler.

Genesis of the Expedition:

The earliest published propopsal for what became the Franklin expedition was in an appendix to Captain Frederick Beechey's late 1843 account of Captain David Buchan's 1818 North Pole attempt in HM Ships Dorothea and Trent (Beechey had been Franklin's Lieutenant in the Trent). The dedication was to Sir John Barrow. Beechey gives almost a blueprint of the systems which were to be fitted to Erebus and Terror and how they were to be used.

Click on text to read the whole book
The language used in this appendix is echoed in Sir John Franklin's comments and in the orders for the expedition.

Perhaps the greatest significance of the engines is that they were part of the expedition from its very conception. Steam was the magic power which made people believe that they could succeed with what had previously been declared to be impossible. The word was used almost reverentially, a synecdoche in place of the technicalities which were incomprehensible to many. To the two usually quoted reasons for the expedition ie. "the discovery of the North West passage and the advancement of science" we can almost add "steam" as the third. It's presence will have contributed to the (hubristic) optimism of the majority embarking on the expedition and to the well-founded pessimism of Captain Francis Crozier.