Lecture at Rosses Point. Plus 'Lead from cans' blood tests.


On Friday the 18th of October this year I was honoured to be a speaker at the annual Maritime Heritage Weekend which takes place each autumn at Harry's Bar, Rosses Point, County Sligo, Ireland and which is superbly organised by the incomparable Medbh Gillard.

The Weekend's place in the calendar is contrived to be the weekend before the Annual Shackleton Autumn School at Athy, which is now in its 19th year. While Ireland's polar heroes are well represented at Rosses Point, the focus encompasses the full gamut of maritime history as is appropriate for its location on Ireland's wild Atlantic coast.

Aside from the event per se, the warmth of the hospitality, the sheer delight of the accommodation and of the victualling and watering locations, and the stunning scenery all need to be mentioned. Even the delightfully benign autumn weather played its part.

My talk, scheduled for 45 minutes, was titled 'Victualling Victoria's Navy'. This was based on my 'Naval Diet Simulation' from earlier in the year and expanded to include wider aspects of the enormous organisation established to feed the nineteenth century Royal Navy, or as I call it "The Empire of Weevil". I had tremendous fun and the question and answer session with the engaged and well informed audience was a delight.

All in all, the whole trip was intensely enjoyable and I'm already looking forward to next year!


I had kept back some of the results of my dietary experiment (detailed previously in this blog) so they could be aired in public for the first time at this event.

My experiment included provisions which were heat-treated after being sealed in lead-soldered cans to make as close a simulation to Goldner's original 1845 product as I could make. The solder used to make my cans was an alloy comprising of 60% tin and 40% lead. I have to admit that I don't know the composition of the solder actually used by Goldner - that is something I intend to check in the future.

A samples of my blood was taken immediately before commencing the diet and another about ten days after completing the week. The results of analysis for blood Pb level and Zinc protoporphyrin (ZPP) are shown below. 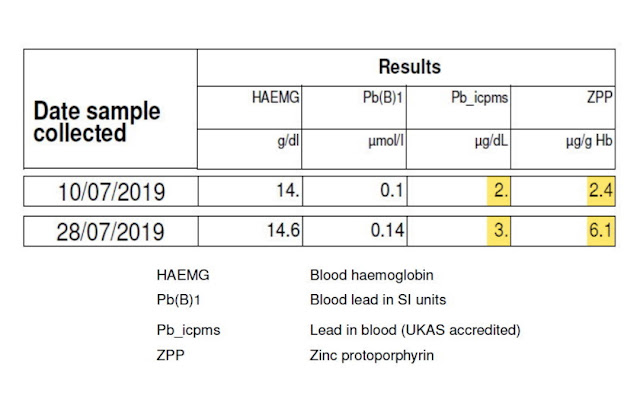 The slightly increased blood lead values speak for themselves.

Elevated ZPP is used as an indicator both for lead exposure and iron deficiency. In this case it appears that I was very slightly iron deficient before the trail and the increased level afterwards is strongly suggestive of lead ingestion.

So what does all this mean? I have long argued against the lead from cans theory but I have to admit that these results will surely give it a boost.

It seems very likely that Franklin's men did absorb some lead from the canned food but what proportion of the lead found in the recovered bones and other tissues derives from this source compared with that from consumption of adulterated foodstuffs earlier in their lives remains to be proved.

A further question which arises concerns which of my experimental canned foods is most to blame for the increased lead level detected? 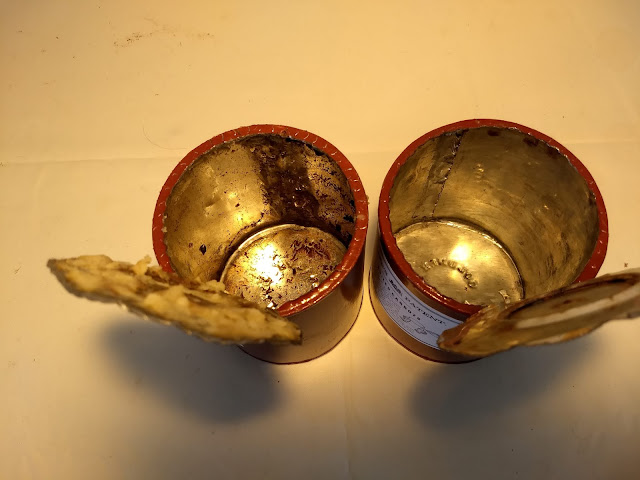 Three cans were used in the trial, Boiled Beef, Boiled Carrots, and Vegetable Soup. It would be very surprising if the level contamination was identical in each of them. The soldered seams in the meat can were noticeably tarnished while those in the carrot can look pristine. My initial thought was that the tarnish was a sign that lead had dissolved into the food but on second thoughts it may be a surface layer of insoluble Lead Sulfide. On the other hand, the pristine seams of the carrot can may be a sign that lead has dissolved, leaving a clean and shiny surface behind.

Samples of the meat and carrots have been preserved in my freezer. Hair samples were also taken, a month after the trial. Hopefully these will provide ammunition for further investigations in the future.

All comments welcome, either here or on the 'Remembering the Franklin Expedition' Facebook page.