To Build a Fire


One particular group of Franklin relics in the National Maritime Museum nicely illuminates the story of one of the humblest but also one of the most profound technological advances of the mid-Victorian period.

Prior to the 1840s, every household would have considered a tinderbox, with flint, steel, and brimstone matches, to be essential equipment for domestic existence. Flint and steel created the spark to set the tinder glowing then a brimstone match turned that ember into a flame. The damper was used to exclude air from the smouldering tinder in order to preserve it for use another day. 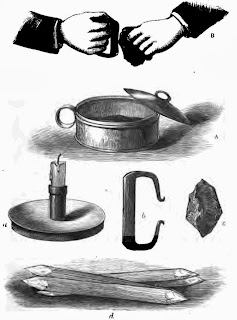 Illustration from The Story of a Tinder-box by Charles Meymott Tidy, published 1897


Friction matches were invented in the 1820s and were variously referred to lucifers, congeves, or vestas. By the time of the 1845 expedition they were on the brink of the mass production which would drastically reduce their cost and consign the tinderbox and its accoutrements to the museum. The vesta cases in the NMM indicate a time when matches were considered sufficiently valuable to warrant a fine container. A tin cylinder in the collection may also be a vesta case. The 'J. HYNAM' matchbox shown above is a particular puzzle. The information that when found it "was sewn up in cloth & that within was a paper" inspires a pang of grief that it may once have contained a critical piece of information from the lost expedition.

Click the image to read the whole magazine on Google Books.

In the third issue of his magazine Household Words, dated April 13, 1850, Charles Dickens wrote an article dealing with the subject of the old way of making fire as a memory of a bygone age.

By coincidence, the preceding article in that paper contains an interesting snippet relevant to the issue of lead poisoning on the Franklin expedition:

"It is a wise provision of Nature, that waters should contain a greater or less quantity of foreign ingredients; for without these water is dangerous to drink. It never fails to take up from the atmosphere a certain proportion of carbonic acid gas, and when passing through lead pipes it imbibes enough carbonate of lead to constitute poison."