In June and July 1931, Chief Trader Paddy Gibson, manager of the Hudson's Bay Company's outpost at Gjoia Haven, made an overland journey along the south coast of King William Island in search of remains of members of the Franklin Expedition.

On an islet in Douglas bay he discovered seven skulls and a large collection of human bones together with small fragments of wood identified as oak and Norwegian pine. His conclusion was:

"It would appear that this island marked a halt in the march of the retreating crews, and was the site of one of the camps: a camp from which many never rose to pursue the terrible march."

Gibson interred the remains on the highest point of the island and built a large cairn over them. 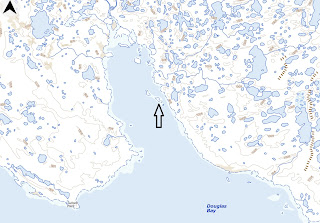 Owen Beattie and James Savelle investigated this cairn in 1981 and reported:

"The remains of the cairn were easily located, but unfortunately all skeletal material had been removed, very likely within the last decade, and most likely by non-archaeologists."

There seems to have never been any detailed archaeological survey of these islets nor any investigation into the whereabouts of the remains. The fate of these bones is just another of the myriad minor mysteries of the Franklin saga.

I sincerely hope that some time in the future the relevant authorities sponsor a more comprehensive search of the locality and that a renewed effort is made to discover the ultimate fate of these remains.