The Spirits of Erebus and Terror 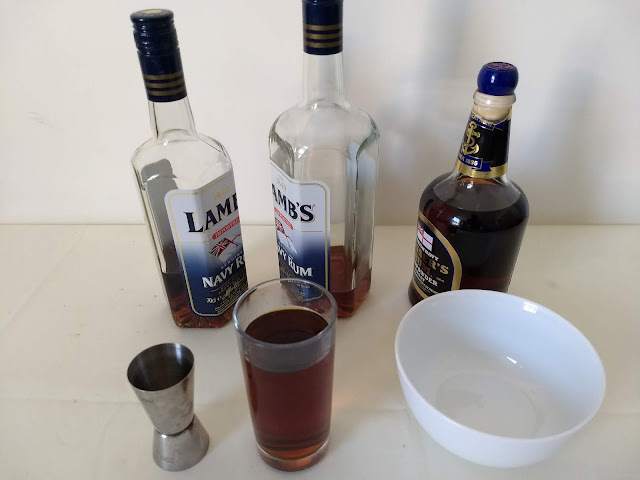 No discussion of the victualing of the Victorian era Royal Navy would be complete without mentioning the rum ration.

Beer, at a rate of one gallon per day, had long been a part of the sailors diet. The capture of Jamaica by the British in 1655 kicked off the gradual process of substituting rum - initially at a rate of half a pint daily. In 1740, for reasons of health and morals, it was ordered to be served out mixed with water (ie. Grog) in the ratio of 1 part rum to 2 parts water and split between morning and evening. In 1824 the evening serving was abandoned, halving the ration to a gill (0.25 pint), with better food and extra pay to compensate. Part of the reduction was almost immediately reversed by the new Imperial measures which increased the volume by a fifth and the evening serving was reintroduced. This was the regime under which Erebus and Terror sailed in 1845. The ration would be halved again in 1850 and finally abolished in 1970.

The spirits used by the Royal Navy were normally shipped on board at a strength of 5% under proof (54.5% ABV), presumably to mitigate the fire hazard. On Arctic expeditions, where space was at a premium, the rum was supplied at a much higher cask strength and diluted to the standard strength when required.

For my experiment I obtained a bottle of Pusser's Gunpowder Proof rum of the regulation 54.5% ABV, plus a larger quantity of the rather less expensive Lamb's Navy Rum at 40% ABV.
More often than not, I simulated the daily ration of 142ml, ie. an Imperial Gill, of the regulation strength Pusser's with 194 ml of the 40% ABV Lamb's. One half served before lunch and the other in the evening.

Using spirits of the strength common today helps the mind to appreciate the quantities better. The daily rum ration of the 1840s was near enough four 50ml doubles by today's standards. The weekly consumption would amount to four times the current recommendation by the The UK's chief medical officer. Well, they had plenty else to worry about.

Queen Victoria had a taste of 'Grog' in 1842 when she visited 110-gun first-rate 'HMS Queen', the Navy's last battleship driven by sail alone.

On her return to the quarter-deck, her Majesty expressed a wish to see the ship's company at their dinner. As soon as it and the grog were served out, the royal party went below. As her Majesty stepped on the lower deck, the men stood up, and although her Majesty kindly desired that they might be seated, they continued standing during the progress round the deck. On arriving opposite to the table abreast of the mainmast, her Majesty desired Captain Rich to let her taste the grog. The gallant Captain ordered a glass to be brought, but the Queen said, "No I wish to taste it as the men have it." A mess basin was filled from the grog can on the nearest table, and presented by Capt. Rich, on his knee; having tasted it, her Majesty smilingly remarked "that it was very good." (not as formerly stated in the daily papers - that it was very weak,) and taking a second sip, returned the basin.


For my experiment, the jokes I made about reducing my gin consumption to make space for the rum fell slightly flat. I was obliged to go on a reduced ration part way through the week for reasons of health and morals. :-(
- September 16, 2019 2 comments: