The chart showing the track of the Sir Wilfrid Laurier on the excellent CBC Franklin search website brings to mind what David Woodman described as 'One of the most unlikely of the Inuit tales'. The story, collected by Major Lachlan Taylor Burwash during several visits to King William Island between 1925 and 1929, concerns the wreck of a ship and a cache ashore near to Blenky Island to the North East of Matty Island. 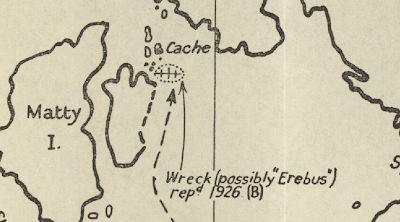 Burwash's analysis was that the wreck was of one of Franklin's ships remanned after the 1848 abandonment. To my mind, the problem of the Inuit testimony giving three different locations for where one of Franklin's two ships sank is no more of a problem than the white man's testimony stating that the two ship's engines came from three different railway companies. I wholeheartedly agree with Woodman's comment that the tale "However, it is so simply and straightforwardly told, and has such telling internal consistency, that it is hard to discount entirely." 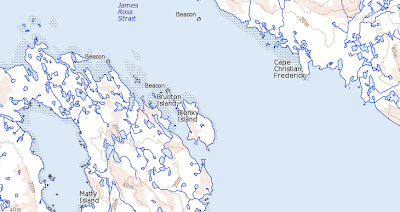 In my opinion it warrants further investigation.