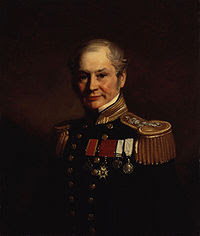 Captain Sir Edward Belcher led the final government sponsored Franklin search expedition of 1852-54.
Les well know is the fact that, during the winter of 1835-36, the then Commander Belcher oversaw the fitting out of Erebus and Terror for service in the polar seas. Years later he reminisced about the Perkins heating system he had installed on the Terror even though, unbeknown to him, it had proved a failure on Back's 1836 voyage and was apparently dismissed as expensive quackery by Sir John Barrow.
I would love to have titled this post "I accuse! - Edward Belcher, with the Lead Piping, at Chatham Dockyard" but as I am still sifting the evidence of changes after Belcher's involvement we have to give him the benefit of the doubt. 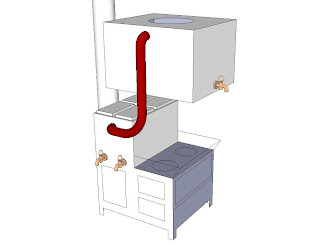 The above image is my interpretation of the arrangement of galley stove (colloquially "the coppers") and ice tank installed in 1836, mostly based on details from the 1837 profile of HMS Terror in the National Maritime Museum. I have assumed four boilers (also "the coppers") each with a separate drain cock although the original drawing shows only one over-large tap at the back of the stove. I think it likely that this arrangement continued in use on both Ross and Crozier's 1839-43 Antarctic expedition and the fatal 1845 Franklin Expedition.
William Battersby originated the suggestion that the source of lead poisoning on the Franklin Expedition was the water making system installed on the ships. I consider his suggestion of lead for the material of the connecting pipe (shown in red) between the Fraser stove and the overhead ice-tank to be of particular significance.
As far as I know, the only account of this system in use is found in the journal of Royal Marines Sergeant William Cunningham of HMS Terror. It is instructive to compare some entries for 1841 in that journal with corresponding accounts in the ship's log.
5 Feb: Thawing Ice in the Coppers all day and night:
[7 Feb: Rec'd in the tanks 750 galls of water from the ice]
13 Feb: Large pieces of Ice falling from the Ropes aloft which gathered up and put in the Ice Tank for Thawing.
[16 Feb: Received 70 Gallons water made from the ice]
The relative quantities and timescales of these two examples suggests to me that the primary means for water making on these ships was not the ice tank but, as on Parry's first voyage, the coppers.
Cunningham's entry for 25 March mentions both the ice tank and the coppers:
Got the ice tank down from over the Cooks Coppers and a funnel Shipped on the scuttle which will carry the Steam off the Lower deck and thereby make it much comfortabler and wholesome for everyone.
By 20 December 1841 they'd discovered an easier way to complete their water:

Made fast to a Floe of ice & filled four tanks with beautifull fresh water ice.

Parry's ships from his second voyage (1821) onwards each had a "simple ingenious and effectual contrivance" which melted snow using waste heat from the stove's flue. Apparently the same apparatus also condensed the waste steam from cooking. The ships of the searching expeditions were also equipped with comparable systems. The plans of the search ships Enterprise and Investigator at the National Maritime Museum show arrangements very similar to those installed on Erebus and Terror with the exception that the ice tank extends further forwards with the stove's flue passing up through it to transmit waste heat to its contents. No steam pipes are shown but unless they were happy to have the galley dripping with condensation then they must have been fitted. The unique feature of the ice tanks of Erebus and Terror was that their only connection to the coppers was by the steam pipe. I would expect them to have been efficient condensers but poor ice-melters.
It is very wasteful of energy to cook with the water continually boiling instead of simmering or as James Fitzjames puts it "just not boiling". It also serves no purpose making significant amounts of steam when reheating canned food to serving temperature.
Considering the extra fuel needed to make sufficient steam and the heat lost to the air, I'd make a rough guess that making water by melting snow in the coppers would require around half the energy needed to make a similar quantity in these ice tanks. So I'd say it would be a logical assumption that on the Franklin Expedition at least some of the water was derived from snow melted in the coppers instead of in the ice tank in order to minimise expenditure of fuel.


Looking again at diagram of the galley it is not difficult to imagine how the water produced in this way could become contaminated with lead.


When the stove is being used for cooking each boiler holds a kettle of provisions which is heated by the boiling water on the bain-marie principle. Excess steam from the cooking rises up the pipe to the ice tank but much of it condenses on the walls of the pipe and runs back down, dissolving lead from the inside of the pipe as it does so and contaminating the boiler water.
When cooking duties are completed, the kettles are removed from the boilers and, oblivious to the possibility of contamination, blocks of snow are loaded into the boilers for melting into water. No steam is generated in water making. The contamination is caused by the repeating cycle of cooking and snow-melting without cleaning out the boilers in between.
The water first drawn from the boilers next to the steam pipe would be the most contaminated while the water from the boilers on the other side would be pure.
The ships which preceded, and those which followed, Erebus and Terror never needed to melt ice in their coppers because their ice tanks produced abundant pure water, at no energy cost, using waste heat. It would not matter if the water in their cooking boilers did become contaminated because that water would never be used for human consumption, simply topped up as it evaporated.
This then is my explanation for the lead poisoning on the Franklin Expedition and my suspicions as to the culprit.
Innocent until proven guilty, of course.
- May 07, 2011 3 comments: