The trouble with maps.

Some musings on the changing shape of King William Island and an opinion on who really discovered the Northwest Passage. 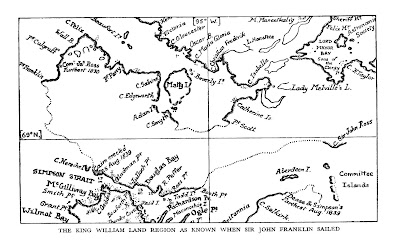 The above map, taken from Cyriax's 1939 book, and apparently based on the pre 1848 version of the Hydrographic Office's Arctic America Sheet II,  supposedly shows the state of knowledge of King William Island region at the time Franklin sailed. What we now know to be King William Island is shown connected to Boothia by an isthmus indicated by dotted lines. The dotted lines which "did for Franklin" as some would have it - the suggestion being that had Franklin suspected that KWI was indeed an island then he would have chosen a route via the less ice-choked waters to its East - the route successfully taken by Amundsen in 1903 - and he would have achived his goal instead of dying on board the ice-bound Erebus. 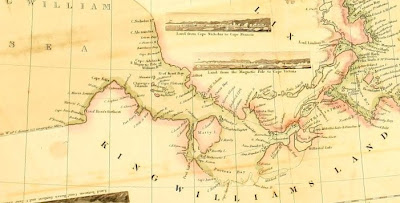 The belief that King William Island was connected to Boothia stems from the above map printed in Volume 1 of John Ross' account of his 1829-34 Victory expedition. This map shows 'Poctes Bay' as the southern end of a gulf between King William Island and Boothia. The information, obtained from the Inuit, that this was a gulf instead of an open strait turned out to be faulty. The track taken by James Ross' on his return to the Victory is shown as a dotted line about twenty miles north of the disputed coastline. 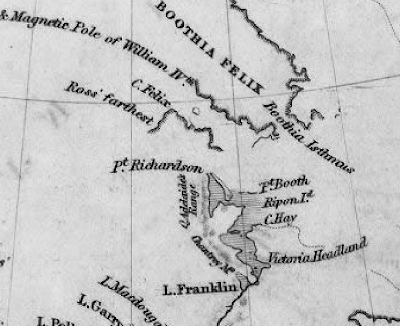 Even before Ross' narrative was printed, information arrived casting doubt on the existence of Poctes Bay. George Back had returned from his journey down the Great Fish River with the information that the estuary of that river opening into a wide bay seemingly due South of Ross' Poctes Bay. This caused speculation in the press that James Ross' Victory Point was actually on an island. In an appendix to his narrative, Sir John remarked of Back's information:


The result of this enterprise has proved that the line of coast to the southward of the Isthmus of Boothia had not been completely examined, and that the information received by Commander Ross from the Esquimaux, making into a bay the land between the isthmus and Matty island, was incorrect; and thus opening a new field for conjecture; but, although it is very probable that the land to the westward of that inlet is an island, I am not of the opinion that the western sea joins with Prince Regent's inlet.

We now know that Ross was correct on both counts. 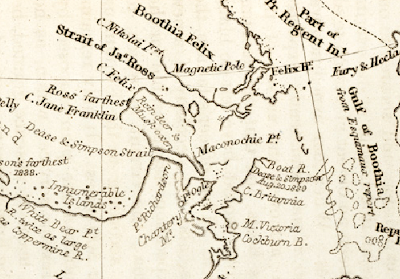 The next visitors to the region were Dease and Simpson in 1839. Dease and Simpson descended the Coppermine,  then sailed an astounding 500 mile Eastwards charting the Northern coast of the continent before charting the Southern coast of King William Island on their return. The map shown above is constructed from their written report alone. Their narrative mentions that they named the river marking their farthest East after their boats and it is duly marked on the map as Boat River. The engraver clearly didn't know that the boats were named Castor and Pollux. The Gulf of Boothia is from John Ross' narrative and noted "from Esquimaux report" - remarkably accurate in this case.


The words 'Reindeer & Musk Oxen' inscribed within the outline of King William Island are indicative of the abundence of game Dease and Simpson reported. This information may have weighed in Crozier's decision to desert the ships.

Considerable disagreements in the longitude of various features can be noted when Dease and Simpson's survey is compared with George Back's. Generally Dease and Simpson's values are better. Notably Back has the mouth of his eponymous river on the 95th meridian of longitude while in reality it is closer to the 96th. This presented subsequent cartographers with the problem of how to reconcile the conflicting surveys. 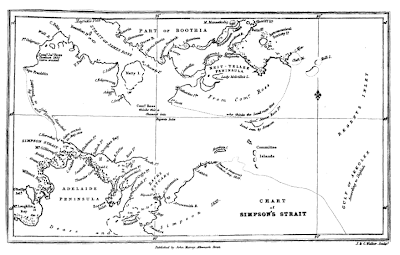 The above map is from Sir John Barrow's 1846 'Voyages of discovery and research within the Arctic regions' (opposite page 528). Barrow was friendly towards James Clark Ross but had a deep animosity towards Sir John Ross. A non-existent passage is shown through the Boothia Peninsula with the legend "From Commander Ross who thinks the land runs thus". A point named for Sir John by Dease and Simpson is renamed Commander James Ross Point. For years Barrow had anonymously assassinated Sir John in the pages of the Quarterly Review. The fact that Barrow had at last put his signature to his vitriol at last gave Ross the opportunity to write a lengthy rebuttal.

Franklin's last letter from the Whalefish Islands, dated 7 July 1845, to Dr (later Sir) John Richardson seems to suggest that Franklin accepted that the likelihood of a passage between Prince Regent's Inlet and previously explored regions of the North American coast.

I admit with you that Regent's Inlet seems to be the most certain way of attaining that point, but the more I reflect upon the voyages hitherto made into that inlet the more convinced I am that James Ross and Parry are right in supposing that ships of our size if they even once got down among the islets and strong tides at the bottom of that Inlet, they would never be got out again. The coast in that part must be surveyed with boats.


The comment that "The coast in that part must be surveyed with boats" might plausibly be taken to reinforce the suggestion that Franklin would be reluctant to take his ships to the East of KWI. In any case, Franklin wanted to go West not East. It is also possible that Franklin may have sailed down the Western side of Peel Strait then became trapped while attempting to cross over to James Ross Strait.

Franklin and Crozier certainly knew how worthless the dotted lines on any printed map were. They did not need to rely on the guesswork of cartographers as the authors of the original surveys were their close associates.


The above map from the end papers of Volume 1 of Belcher's "The Last of the Arctic Voyages" shows the coastline known immediately prior to McClintock's 1858 voyage of the Fox.

McClintock's discovery of what is now known as Franklin Strait, linking Peel Sound to James Ross Strait, was the final component of the route which would, four decades later, be navigated by Roald Amundsen's Gjøa. It also completed the coastline of North America.


Even if Dr John Rae's Inuit contacts had provided him with the Victory Point record, which notes the location where Franklin's ships were beset, the route taken from Beechey Island to that point remains conjectural to this day so can not be relied on as the penultimate link in the passage to be completed by the discovery of Rae Strait.

So if the question "Who discovered the Northwest Passage" is taken to mean who first completed the discovery of a passage navigable by the ships of the time, in other words Amundsen's route, then the answer must surely be Francis Leopold McClintock.
- February 27, 2013 8 comments: