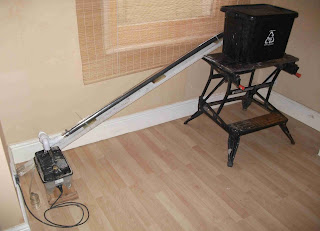 This bizarre contraption is my home-made experiment intended to shed some light on the question of the origin of the lead detected in the bones of participants in the Franklin Expedition. The apparatus is designed to  approximate the system originally installed on HMS Terror following the suggestion of Captain George Back on the 16th of May, 1836. A 2kw wallpaper steamer plays the part of the Fraser stove and the condenser/snow-tank is a black plastic box which normally holds paper for recycling. The five-foot length of lead piping between them is arranged so that any water condensed within it can't flow back into the steamer but instead drains via a narrow plastic tube into a glass jar on the floor. This approximates the arrangements shown on the 1837 profile drawing of HMS Terror but has the advantage, for experimental purposes, that the water which condenses in the pipe can be collected separately instead of mixing with the boiler water. 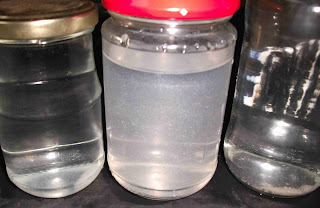 I had been worrying how to test the lead content of the water produced. There are test strips available, for a few pounds, which give a yes/no answer to the question of whether lead is present in tap water and there are digital colorimeters, costing a few hundreds, which give an accurate measurement in terms of parts per million. In the event, no special equipment is needed. The water collected is cloudy with lead carbonate - white lead. After an hour or so the water clears leaving a powdery deposit at the bottom of the jar. When the jar is shaken it produces a pretty snow storm of glinting crystals, as shown by the middle one of the three jars in the photo above. This sample was produced as the result of 30 minutes operation. The conclusion I draw from this demonstration is: that the water making systems in place on Erebus and Terror during the fatal 1845 Franklin Expedition are likely to have introduced relatively huge quantities of lead, measurable in terms of grams per day, into the drinking water supplies, when the ships were overwintering. This seems likely to have been the major source of lead exposure, totally overwhelming any trace amounts absorbed from any other of the proposed sources.