The Newspaper Column Which damned Goldner 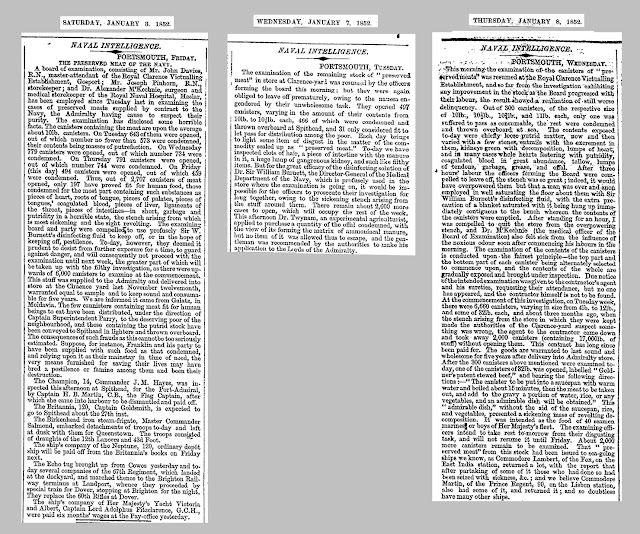 The Times newspaper of the mid-Victorian era carried, on page 7, a column titled "Naval Intelligence". As might be expected, the column reported all manner of snippets of news on subjects connected with Her Majesty's Navy.

From Saturday, January 3, 1852, the column began a series of items detailing, in lurid detail, the condemnation of stores which had begun the previous Tuesday (December 30) at the Royal Clarence victualling establishment at Gosport near Portsmouth.

THE PRESERVED MEAT OF THE NAVY.

A board of examination, consisting of Mr. John Davies,
R.N., master-attendant of the Royal Clarence Victualling
Establishment, Gosport; Mr. Joseph Pinhorn, R.N.,
storekeeper; and Dr. Alexander M'Kechnie, surgeon and
medical storekeeper of the Royal Naval Hospital, Haslar,
has been employed since Tuesday last in examining the
cases of preserved meats supplied by contract to the
Navy, the Admiralty having cause to suspect their
purity. The examination has disclosed some horrible
facts. The canisters containing the meat are, upon the average,
about 10lb canisters. On Tuesday, 643 of them were opened,
out of which number no fewer than 573 were condemned,
their contents being masses of putrefaction. On Wednesday,
779 canisters were opened, out of which number, 734 were
condemned. On Thursday, 791 canisters were opened,
out of which number, 744 were condemned. On Friday
(this day), 494 canisters were opened, out of which,
459 were condemned. Thus, out of 2707 canisters of meat
opened, only 197 have proved fit for human food, those
condemned for the most part containing such substances as
pieces of heart, roots of tongue, pieces of palates, pieces of
tongues, coagulated blood, pieces of liver, ligaments of
the throat, pieces of intestines— in short, garbage and
putridity in a horrible state, the stench arising from which
is most sickening, and the sight revolting. The examining
board and party were compelled to use profusely Sir W.
Burnett's disinfecting fluid, to keep off, or in the hope of
keeping off, pestilence. To-day, however, they deemed it
prudent to desist from further exposure for a time, to guard
against danger, and will consequently not proceed with
the examination until next week, the greater part of which will
be taken up with the filthy investigation, as there were up-
wards of 6000 canisters to examine at the commencement.
This stuff was supplied to the Admiralty, and delivered into
store at the Clarence yard last November twelvemonth,
warranted equal to sample, and to keep sound and consuma-
ble for five years. We are informed it came from Galatz,
in Moldavia. The few canisters containing meat fit for human
beings to eat have been distributed, under the direction of
Captain Superintendent Parry, to the deserving poor of the
neighbourhood, and those containing the putrid stock have
been conveyed to Spithead in lighters, and thrown overboard.
The consequences of such frauds as this cannot be too seriously
estimated. Suppose, for instance, Franklin and his party to
have been supplied with such food as that condemned,
and relying upon it as their mainstay in time of need, the
very means furnished for saving their lives may have
bred a pestilence or famine among them, and been their
destruction.

The examination of the remaining stock of "preserved
meat" in store at Clarence-yard was resumed by the officers
forming the board this morning; but they were again
obliged to leave off prematurely, owing to the nausea en-
gendered by their unwholesome task. They opened 497
canisters, varying in the amount of their contents from
10lb. to 10½lb. each, 466 of which were condemned and
thrown overboard at Spithead, and 31 only considered fit to
let pass for distribution among the poor. Each day brings
to light some item of disgust in the matter of the com-
modity sealed up as "preserved meat" To-day we have
inspected clots of hair, a piece of intestine with the manure
in it, a huge lump of gangrenous kidney, and such like filthy
items. But for the great efficacy of the disinfecting solution of
Dr. Sir William Burnett, the Director-General of the Medical
Department of the Navy, which is profusely used in the
store where the examination is going on, it would be im-
possible for the officers to prosecute their investigation for
long together, owing to the sickening stench arising from
the stuff around them. There remain about 2,600 more
cases to open, which will occupy the rest of the week.
This afternoon Dr. Twynam, an experimental agriculturalist,
applied to purchase a quantity of the offal condemned, with
the view of its forming the matrix of ammoniacal manure,
but no item of it was allowed thus to escape, and the gen-
tleman was recommended by the authorities to make his
application to the Lords of the Admiralty.
Times, January 8, 1852

This morning the examination of the canisters of "pre-
served meats" was resumed at the Royal Clarence Victualling
Establishment, and so far from the investigation exhibiting
any improvement in the stock, as the board progressed with
their labour, the result showed a realization of still worse
delinquency. Out of 300 canisters, of the respective size
of 10lbs., 10½lb., 10¾lbs., and 11 lbs. each, only one was
suffered to pass as consumable, the rest were condemned,
and thrown overboard at sea. The contents exposed
to-day were chiefly loosc putrid matter, now and then
varied with a few stones, entrails with the excrement in
them, kidneys green with decomposition, lumps of heart,
and in many cases whole hearts festering with putridity,
coagulated blood in great abundance, tallow, lumps
of tendons, garbage, grease, and offal. After three
hours' labour the officers forming the board were com-
pelled to leave off, the stench was so great; indeed, it would
have overpowered them, but that a man was ever and anon
employed in well saturating the floor about them with Sir
William Burnett's disinfecting fluid, with the extra
precaution of a blanket saturated with it being hung up imme-
diately contiguous to the bench whereon the contents of
the canisters were emptied. After standing for an hour, I
was compelled to quit the store from the overpowering
stench, and Dr. M'Kechnie (the medical officer of the
Board of Examination) also felt sick from the influence of the
noxious odour, soon after commencing his labours in the
morning. The examination of the contents of the canisters
is conducted upon the fairest principle—the top part and
the bottom part of each canister being alternately selected
to commence upon, and the contents of the whole are
gradually exposed and brought under inspection. Due notice
of the intended examination was given to the contractor's agent
and his sureties, requesting their attendance, but no one
has appeared, and the contractor himself is not to be found.
At the commencement of this investigation, on Tuesday week,
there were 6,660 canisters, varying in size from 4 lbs. to 12lbs.,
and some of 32 lbs. each. and about three months ago, when
the stench arising from the store in which they were kept
made the authorities of the Clarence-yard suspect some-
thing was wrong, the agents to the contractor came down
and took away 2,000 canisters (containing 17.000 lbs. of
stuff) without opening them. This contract has long since
been paid for. The goods are warranted to last sound and
wholesome for five years after delivery into Admiralty store.
After the 300 canisters above mentioned were examined to-
day, one of the canisters of 32 lbs. was opened, labelled "Gold-
ner's patent stewed beef," and bearing the following direc-
tions :—"The canister to be put into a saucepan with warm
water and boiled about 15 minutes, then the meat to be taken
out, and add to the gravy a portion of water, rice, or any
vegetables, and an admirable dish will be obtained." This
"admirable dish," without the aid of the saucepan, rice,
and vegetables, presented a sickening mass of revolting de-
composition. It was intended as the food of 40 seamen,
marines, or boys of Her Majesty's fleet. The examining offi-
cers intend to take rest to morrow from their disgusting
task, and will not resume it until Friday. About 2,000
more canisters remain to be examined. That "pre-
served meat" from this stock had been issued to sea-going
ships we know, as Commodore Lambert, of the Fox, on the
East India station, returned a lot, with the report that
after partaking of some of it those who had done so had
been seized with sickness, &c.; and we believe Commodore
Martin, of the Prince Regent, 90, on the Lisbon station,
also had some of it, and returned it ; and so doubtless
have many other ships.


These three paragraphs amount to a nauseating tally of putrid garbage which disgusted the readership and roused a hue and cry that something must be done to root out the evil of crooked contractors and incompetent victualling officials.

It certainly destroyed Goldner's reputation and cemented him in the role of an almost pantomime villain and bogeyman for the next 150 years or more.

What interests me is the fact that it wasn't the cans of preserved meat but actually the newspaper reports reproduced above which had the greater proportion of garbage. There can be no doubt that Goldner was falsely accused. This point will be expanded in future posts.