As mentioned in my previous post, I am currently attempting to assemble the necessary provisions to perform a reasonably authentic simulation of the diet of the early Victorian Royal Navy. The intended duration is  one week, but if it goes smoothly then maybe I'll try it for a longer period at a later date.

In his book, The Voyage of the "Fox" in the Arctic Seas, Francis McClintock reported the discovery of nearly forty pounds of chocolate in the deserted boat at Erebus bay. This was the only substance of any nutritional value among the remains recovered from the expedition.

Cocoa, the liquid, made in this case, from chocolate, the solid, was the standard breakfast of the Royal Navy from the first quarter of the 19th century onward. The ration was one ounce per day to make one pint of the drink. Originally the roasted beans (sometimes confusingly referred to as cocoa nuts) were supplied to the ships, and preparation of the cocoa involved pounding with a large mortar and pestle, but by the late 1830s the prepared chocolate was manufactured in government owned mills at Deptford, London. After some problems, celebrated chemist Dr Andrew Ure was consulted in 1842 to troubleshoot the manufacturing process.

For my experiment in making Navy chocolate, I started with a bag of cocoa nib, which simply consists of cocoa beans which have been roasted and then cracked into small pieces. I soon discovered that my kitchen was lacking a grinder which could mill these fine enough so I next purchased a bag of cocoa mass. This is still the pure bean after it has been ground to a minute degree of fineness, and in this case moulded into buttons. 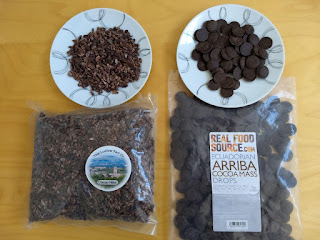 Sources slightly later than the Franklin era refer to two sorts of cocoa: "Ordinary", for which the only added ingredient is sugar, and "soluble" or "optional", which also includes a quantity of starch such as arrowroot or sago flour. It appears that only the "ordinary" sort would have been supplied to Franklin's ships but that formulation has the disadvantage that it must be boiled with water for several hours before the mixture thickens satisfactorily. The "soluble" version was quicker to make, so it could be handed out to men on duty during cold nights.

As I wanted to make both types, I melted the cocoa mass in a small pan and compounded my version of the "ordinary" with 16% sugar and the soluble with 18% sugar and 18% arrowroot starch. The proportions are from an 1895 source. Extra sugar is added when the chocolate is boiled up to make the drink. 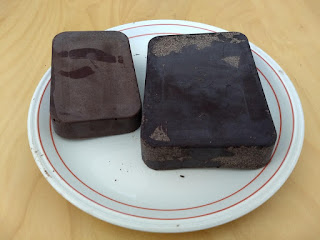 The slabs of chocolate looked good, but upon boiling up an ounce of each to make the liquid cocoa drink, both samples seemed to me to be somewhat too thin. Because of that, the example of the finished product pictured below has been thickened by the addition of a little finely milled oatmeal. It may look a bit like cold gravy in this photo, but I can attest that it is delicious. 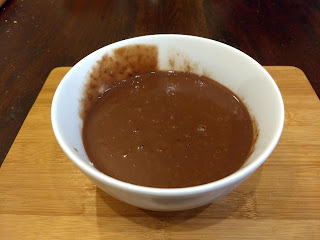 Cocoa remained a staple in the Navy, even into the Cold War era. Referred to as "Pusser's Kye" (or Ki) it is still reminisced over, particularly for its properties in fending off the cold. Many a sailor must have sung its praises during the cold watches of the night. Many thanks to YouTuber Scoutforlife for permission for sharing this piece of oral history which was passed down from his father. Explanation of some of the terms can be found in his post "How to make Kye". Various versions can be found, dating from WWII or earlier, with varying amounts of profanity.

For several reasons, I find this strangely appropriate when thinking of those Arctic voyagers of a different era.