Time we put the tinned food back in the cupboard: Busting the Franklin Expedition myth of 'lead poisoning from tinned food'.

The idea that Franklin's men were poisoned by lead from tinned food has reached almost the status of dogma. For many members of the public it seems to be almost the only 'fact' they know about the expedition.

Owen Beattie and John Geiger's bestselling book 'Frozen in Time' (2004 edition) includes the statement "There is no question of the source of the lead found in the bodies of Franklin's men: it came from the tinned foods". This claim is supported by a paper by Walt Kowal and others published in the Journal of Archaeological Science in March 1991, but, contrary to that claim, the source of the lead was questioned from the very first.

Kowal and his co-authors found that the ratios of the several isotopes of lead in solder from cans found on Beechey Island matched the ratios measured in human remains from Beechey and King William Islands. They concluded from this that the lead in both cases came from the same source. That seems reasonable - indeed it's likely that all the lead on the ships came from the same source.

No measurements were made on contemporary British samples of lead, instead the authors referred to a database of isotope ratios of 98 samples of lead ore from the British Isles published by Stephen Moorbath in 1962.

Having found no credible match, they speculated that:

"...since the isotopic ratio for the Franklin materials is so different from most lead sources in the British Isles, it is quite possible that the lead used in the solder manufacture came from some other nation".

Their argument seems to be, that because all of the other sources of lead which the members of the expedition would have been exposed would have come from British mines, then the only possible explanation for the presence of the unusual exotic lead in the human remains was that it had come from the solder of the tin cans.

Unfortunately mass-spectrometry was still in its infancy in the early sixties, and the isotope measurements published in Moorbath's paper do not bear direct comparison with those made thirty years later. In 1996 Brenda Rohl published isotope ratios of 383 samples of lead ore from the British Isles. Her introduction states:

"The data in pioneering papers such as Moorbath (1962) and Brown (1966) are now too inaccurate to be compared with modern lead isotope data".

It is implausable that isotope data could be used to trace the origin of any industrial era lead back to a single mine. Even connecting a sample with a single mining region presents difficulties.

Veins of ore with distinct isotope ratios can occur in close proximity. Equally, veins with indistinuishable isotope signatures can occur many miles apart. A small number of smelters would serve numerous mines within a region, producing metallic lead with an isotope signature averaged from the constituent ores.

Lead is probably the most easily recycled material known to man. At the lead mills ingots of newly smelted lead would be melted together with old lead scrap to manufacture whichever products the market required, such as sheet or pipe or solder.

The isotope signature of a typical sample of manufactured lead would therefore represent an amalgam of both contemporary and previously active mining regions. The average composition of the mixture would change only gradually as established mining regions declined and new ore provinces were exploited.

In 1839, Andrew Ure published statistics showing the relative productivity of the different Lead mining regions at that time. The North Pennines (Durham, Cumberland, and Yorkshire) being the dominant region.

Click on image for source document
The following chart compares the Franklin project data with geological data from Rohl, chosen with reference to the above table, and data from 36 samples from the Northern Pennines, from a 2001 paper by Brett Scaife and others. 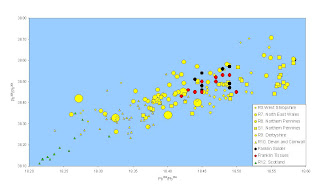 Click to enlarge.
Data points from the two Welsh counties are represented by the larger circles to make up for their small number. Derbyshire had been of greater significance in the preceding century hence may deserve greater prominence than Ure's figures suggest due to recycling of old lead. There has been no attempt to distinguish the relative productivity of individual mines within a region, nor to represent measurement confidence intervals.

It is plausible that the isotope signature shared by both the solder and the human remains is simply that of common English lead of the period and that the high levels of lead detected in the human remains could have resulted from exposure to any of a myriad of contemporary sources and certainly not uniquely to the solder of the tin cans.

That members of the expedition suffered from lead exposure is not disputed, but there is no evidence to suggest that "it was the reliance of Franklin's expedition on tinned food that was the root cause".

The supplier of the tinned food, the much vilified Stefan Goldner, is exonerated of any blame in connection with the demise of the Franklin Expedition.

The eminent Food Scientist and Science historian Keith Farrer, OBE (who even has an award named after him) was among the first to question the 'lead poisoning from tin cans' hypothesis.

In a paper published in the Journal of Archaeological Science in 1993, Farrer pointed out, among other things, that only acidic foods such as tomatoes can defeat the cathodic protection conferred on lead by the more reactive tin and iron and that the canned provisions supplied to the expedition included no acidic component. It appears that all published reports of canned food being been found with a high lead content have involved acidic foodstuffs.

Farrer's conclusion regarding the canned food was that "their contribution to the body loads of lead or to any incipient ill health in Franklin's crewmen was trivial".

However no scholarly article in a scientific journal can compete for the public consciousness with a bestseller like 'Frozen in Time'.