Archimedes and Croydon: The Engines of Erebus and Terror? 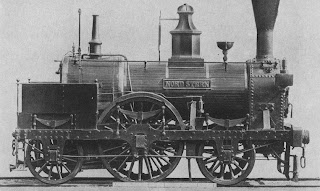 When I delivered my part of the Newcomen Society talk which I shared with William Battersby at Manchester Museum of Science and Industry last February I was wondering whether the engines fitted by Maudslay's to Erebus and Terror in the spring of 1845 could have been of Edward Bury's bar-frame design - so easy to remove the wheels and connect a shaft coupling...

However, further research suggests that the engines were originally No 2, Croydon, and No 6, Archimedes built by G & J Rennie in 1838 and 1839 respectively for the London and Croydon Railway. They were of 2-2-2 wheel arrangement with outside bearings, and inside cylinders.

The Archimedes locomotive was named after the Screw Steamship of the same name fitted out by Messrs. Rennie in 1839, so it is a nice irony that it should end its days connected to a screw propeller.

The locomotive pictured above, Nordstern, is an example of the type, albeit rebuilt a couple of times before the photograph was taken in 1865.

The accepted view, that one of the ships was equipped with a Planet type engine, and the other a Samson type, does not seem to stand up to close scrutiny.

Richard Cyriax says that Erebus's engine was supplied by the Greenwich Railway, apparently based on the following snippet from the Illustrated London News (ILN):

Only the very end of the article as shown above contains original material as most if not all of the preceding body of the article is copied nearly verbatim from other publications. Some of the details above may well have come from those whose cabins were sketched, most likely Commander Fitzjames.
Although the text shown mentions Erebus specifically and is mostly written in the singular it is clear that the description of the engine can apply identically to both ships. This would fit with a rule imposed by Sir Edward Parry for an earlier expedition, that the steam engines:

Parry had adopted a version of this rule more than twenty years earlier for the rigging and equipment of Arctic discovery ships. I think it inconceivable that he would abandon such an obviously wise principle for the 1845 expedition.

Another point is that the ILN doesn't actually say that that anything came from the Greenwich Railway company, but instead uses the phrase "ran upon the Greenwich Railway" which could reasonably be interpreted as meaning the physical track owned by that company but which was also used by three others (the Brighton, Croydon, and Dover companies) as their gateway to London.

The London & Greenwich Railway was the first railway in London, later the London & Croydon Railway branched off from it. The London & Brighton Railway then extended south from the Croydon terminus to Brighton and then the Dover company (strictly the South Eastern Railway) branched of westwards to Dover.

Terror's captain, Francis Crozier, mentions the engine of his ship in a lengthy grumbling letter to Sir James Clark Ross, the original of which survives in the Scott Polar Research Institute in Cambridge:

As a further detail, in 1845 the Dover company permanently leased the assets and business of the Greenwich company which remained in existence as a shell company purely to distribute the leasing income to its shareholders.

Earlier, in an attempt to achieve economies of scale, the Brighton, Croydon, and Dover companies had pooled all their rolling stock under a "Joint Committee" which then charged the companies in proportion to their usage of engines and carriages. When an engine needed repair it was put into the workshops at New Cross and a replacement was issued from a reserve stock (totalling 18 in March 1845) of engines in working order. Thus, at different times in its history, an engine could be running between London and either Croydon, Brighton, or Dover, or working as an assistant engine to help heavy trains ascend at one of several places of the network with difficult gradients.
In 1845 this cooperative arrangement was in the process of being dismantled.

The suggestion that both engines came from the same source is at odds with Lieutenant John Irving's comment in a letter to Katie, his brother's wife (often erroneously referred to as his sister) :

There are several reasons for questioning the accuracy of this comment.
An entry (not perfectly legible) in the Admiralty's digest of correspondence dated 29 March 1845 can be read as "Engine & boilers are ready & Board desire that the Engines may be put in without delay - Messrs. Maudslay to do." Alternatively, it may read "Engine rooms are ready...".

National Archives, Crown Copyright waived for non-commercial use.
The last recorded existence Archimedes and Croydon occurs two weeks later, in the list of engines allocated to the Dover company on 12 April 1845 in preparation for the dissolution of the Joint Committee planned for January 1846.

However, beside the name of each of these engines in the list are the words "part sold" and the value stated is around one third that of comparable engines. This raises the possibility that important parts of these engines (such as the boilers and cylinders) had been removed, and what remained of each was just a rolling chassis.

National Archives, Crown Copyright waived for non-commercial use.
This is exactly what I would expect. Maudslay's would have no use for the wheels, suspension, or the wood and iron sandwich frame chassis. The rolling chassis left behind would retain a value either for spare parts or to be rebuilt as a locomotive again. 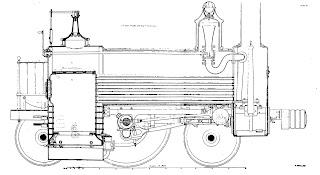 Section through one of the engines built by G & J Rennie, possibly Croydon. Details below. 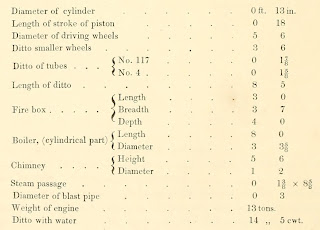 The Nominal Horsepower, which is purely calculated from the dimensions of the cylinders and bears little relationship to the actual power output, works out at 24.72 which is effectively identical to the value of 25 horse power given in the ILN article.

Although Archimedes and Croydon were 2-2-2 locos with inside cylinders, many books erroneously describe them as 0-4-2 locos with coupled driving wheels and outside cylinders. This is due to a mix-up of drawings published by Samuel Brees in 1840.

Further work remains to be done on this subject, which is why the title is in the form of a question. However, I would suggest that these engines are the only ones which fit all the primary evidence and that there is a considerable body of circumstantial evidence which also supports this claim.
- July 30, 2010