The Official Aquittal of Stefan Goldner 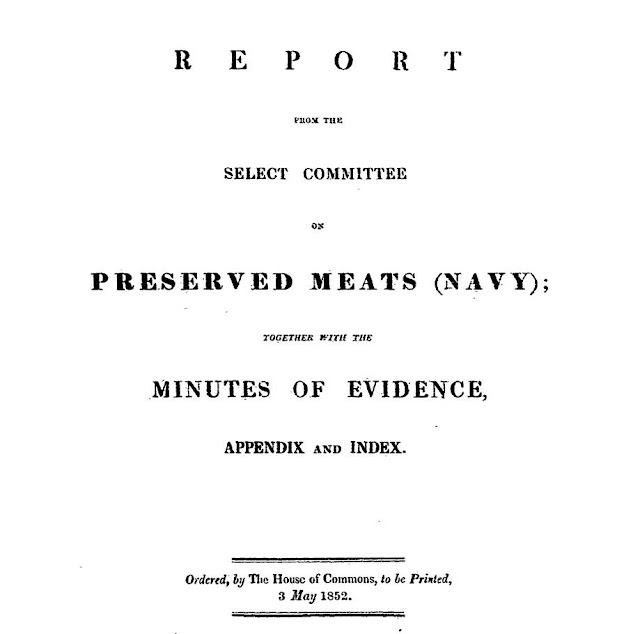 The Report from the Select Committee on Preserved Meats (Navy), Together with the Minutes of Evidence, Appendix and Index,  is a weighty document of nearly 500 pages.

As the title page suggests, it documents in great detail the Government's inquiry resulting from the Preserved Meats scandal which broke in the Times on January 3, 1852.

The examination and condemnation of canned meat at the Royal Clarence Victualling Establishment in Gosport, Hampshire, which the Times reported on was just one episode in the closing stages of an official Admiralty investigation which had already been underway for the best part of a year.

Deep in the Appendices, on page 393, is the document which explicitly exonerates Goldner of any criminality.

On 27 August 1851 Thomas Tassell Grant, The Comptroller of the Navy's Victualling Department, wrote to William Frogat Robson, the Admiralty Solicitor, to ask if any of Goldner's actions rendered him liable to prosecution.

The conclusion was received the next day from Robson's deputy, H Swainson:

There appears to have been repeated quarrels between Mr. Goldner and his servants at the factory, which may account for the bad state of some canisters by the introduction of offal and filth. It is not likely that Mr. Goldner, under the serious penalties of his contract, would make himself a party to so flagrant a breach, which must fall upon himself; and unless he could be fixed with a knowledge of using or conniving at the use of some dangerous ingredients in the mode of curing or preserving the meat, he cannot be held criminally responsible for the acts of others.

But what really happened?

The report states that Goldner had been going on well between 1844 and 1849.

There had been occasional reports of improper substances in the cans but rarely were they anything sinister. On several occasions the cans were rejected for containing tongue. Tongue is classed as offal but is actually a premium meat fetching a higher price than many other parts of the carcass.

As well as these problems, the scale of the business had grown considerably since the original running contract of 1844 so the Admiralty decided to move to annual contracts for fixed quantities open to competitive tender as was done for other foodstuffs.

The real problems began with the 1850 contract which required the meat to be packed in larger pieces and in larger cans than before - 6, 9, and 12 pound cans. The men disliked their meat being served in small pieces and the larger cans were a cost saving.

An additional change was how the weight of the meat was reckoned.
The 1844 contract specified the cans to be packed with raw meat before processing, then on opening each pound of contents was required to provide 12 ounces of cooked meat and 4 ounces of gravy. This had led to many complaints about short measures so the 1850 contract stipulated that each pound must be 16 ounces of cooked meat and only so much gravy as necessary. This change necessitated the meat to be pre-cooked before canning and the cans packed tighter with less room for the liquid to circulate during the heat processing. The net result of these changes was to reduce the margins for error during processing and making under-processing more likely.

The recipe for disaster was compounded by Goldner's combative personality and abrasive management style which from time to time led some of his disgruntled, underpaid, workforce to deliberately sabotage the product.

The final element in the mix was the fact that Goldner was absent from Galatz for considerable periods, leaving his 18 year old nephew in sole charge of the critical preserving process.

The most headline grabbing part of the disaster were the 'filthy substances' found in some of the cans. It is perfectly understandable that they will have provoked feelings of disgust and anger.

Grant estimated that of the meat issued to ships, less than two one hundredth of one percent, or 2 lb in 10,000 lb, matched this description.

The bigger problem was meat which appeared perfectly sound and sweet when accepted into the stores but which spoiled far sooner than had occurred in the past. The fault was far more frequent in the 9 and 12 pound cans introduced in the 1850 contract. The six pound cans were usually satisfactory.

When, prompted by the Admiralty, other manufacturers attempted, at a higher price, to supply preserved meat to this specification they failed too.

The parliamentary inquiry revealed no systemic fault in the system of contracts for supplying the Navy but noted the difficulties with the larger cans. They reported that in the new contracts by then already in force, only 6 lb cans were being used. The report also highlighted the testimony of several witnesses that it would be beneficial to bring the production of preserved meat in-house and this was subsequently done.

Many have assumed that Sir John Franklin's 1845 expedition was supplied by Goldner on the basis of lowest cost tender but the report makes clear that this was not the case.

That special consideration was given to the preserved meat for the Franklin expedition is entirely consistent with what we know about the other foodstuffs. No effort or expense was spared in providing the best of everything. I do not know whether Franklin's provisions were canned at Galatz or the factory at 137 Houndsditch or a mixture of the two but the fact it was a special purchase makes me suspect it was Houndsditch and that it was probably inspected by the Navy's Victualling Department at the time.

The Parliamentary report clearly shows that the 1852 scandal casts no shadow whatsoever on the integrity of the preserved provisions which Goldner supplied to the Franklin expedition.

Nonetheless, it wouldn't be very long before Goldner would be reviled as a criminal, a traitor, and worse.

My previous post concerning the Nag's Head pub was something of a tinned herring - an appetiser intended to gently tease the readershi... 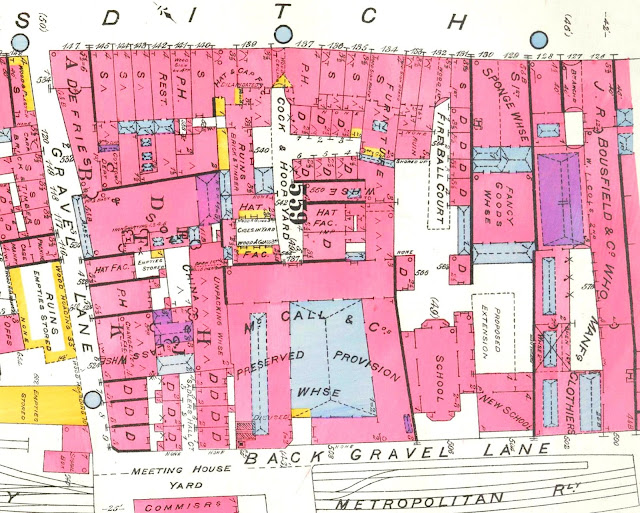