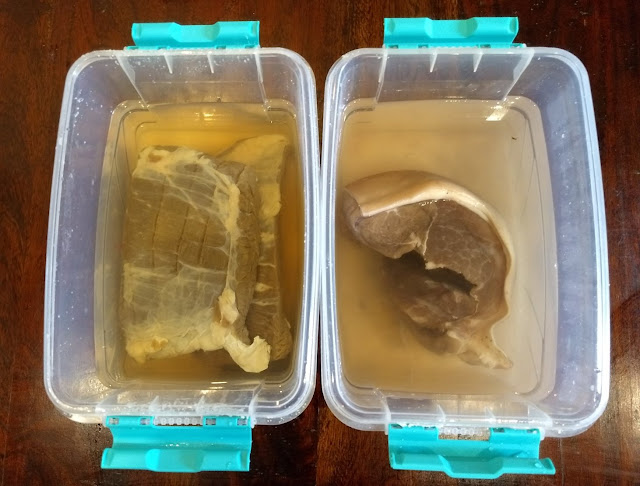 British artist Damien Hirst made a name for himself (and quite a bit of money) by preserving parts of chopped up animals in tanks of liquid. My homage to the genre is shown above. Beef on the left and pork on the right. I just need to think of a lengthy and ironic title. No prizes for suggestions, thanks. Anyway, back to my Naval food project... 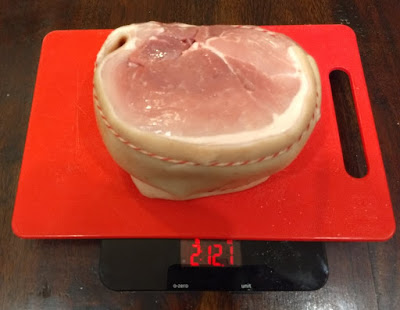 Prior to the introduction of canning, the main source of protein for seafarers was meat which had been preserved by salting. It is a simple process, which goes back centuries, if not millennia. You start with a lump of meat, cover it in dry salt, then leave it in a cool place for a few days. For the beef, a small proportion of food-grade saltpetre (about 1%) was added to the salt. Supposedly this should help it keep some of its original colour. 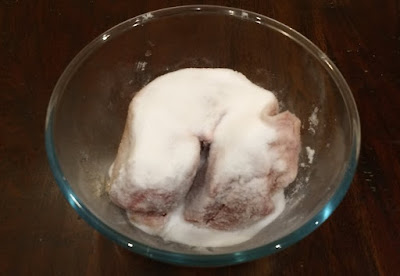 Osmotic pressure, caused by the salt, draws liquid out of the meat. This liquid is periodically poured off, and new dry salt added. The dry salting process can continue indefinitely or, as in this case, the meat can be submerged in a strong brine solution. The strength of the pickle can be judged from the fact that there is a layer of undissolved salt crystals at the bottom of the tub. It is important that the meat, which is slightly buoyant at this stage, is wholly submerged so I started off by using a couple of off-cuts from an oak beam to hold it under as a nod towards the use of oak barrels back in the day. 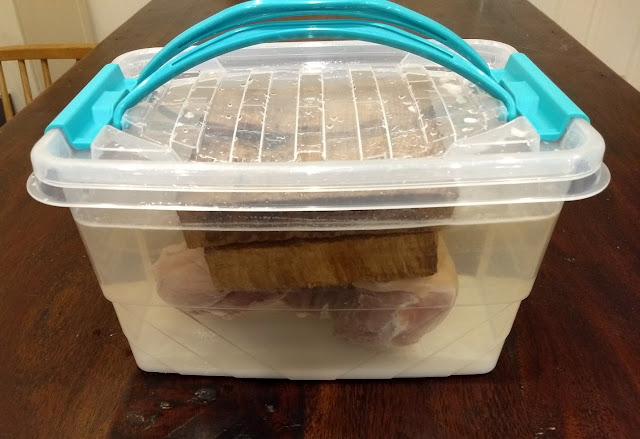 Of course, there are a few ways in which the process described above diverges from its historical antecedents. For the Franklin expedition, the beef and pork was salted in eight pound and four pound pieces respectively. These would have been on the bone while I used British boneless pork leg from Morrison's and Irish beef brisket from Tesco. There are many humorous tales about the salt meat of the Navy. Referred to as 'salt junk' or 'salt horse'. It has been said that after too long in the cask it was hard enough to be turned or carved into durable ornaments. Myself, I don't set much store by these tall tales. I have confidence in the diligent efforts of the Victualling Board. I am convinced that, cooked properly, it will be delicious!